Hippodrome, Middlesbrough
Cinema Address:
61 Wilson Street, Middlesbrough, TS1 1SF
Period of Thompson Ownership:
1910-1928. Hippodrome Theatre bought from liquidator for £13,000. It came with an 18 piece orchestra. Sold to Denman Picture Houses Ltd.
How Acquired by Thompson:
Bought for £13,000
Architect/Design:
Architect was George F Ward of Birmingham, when originally built as a theatre in 1906 "Externally it is a building of brick, faced with buff terracotta, handsomely carved. The entrance is sheltered by a porch of glass. One great advantage possessed by the hall lies in the fact that waiting rooms have been provided for gathering audiences for every part of the house … … … The whole hall has a light and cheerful appearance, and general admiration is expressed at the effective plastic decorations which have been done in the style of Louis XV., in gold, white, and cream, relieved with grey and blue." Alterations in 1913 to enhance cinema use. The stage had a proscenium width of 40ft, a stage depth of 35ft and generous wing space.
Other Info:
It had cost £23,000 to build and opened on 17th August 1908 under manager Signor Rino Pepi with a variety programme including Arthur Prince, Florrie Ford, and Jock White. However it was not a financial success until bought by Tommy Thompson in 1910 for £13,000. It continued with variety and film until modified in 1913 to be predominantly a cinema.
Fate of the Cinema:
The auditorium was drastically updated in the 1930s and again in 1954. In the 1930s the two balcony fronts had all decoration taken off and the boxes were removed. The stage remained unaltered at that time. Since closure as a cinema in 1956 the auditorium was further altered to create the Astoria Ballroom in 1959 and another part the Showboat Social Club in 1968. Other occupiers were The Venue nightclub in 1991, and Wonderland Bingo Club, Eventually it became two nightclubs and then part of the auditorium the Chicago Rock Cafe. In 1988 it became Grade II listed. Now closed and derelict (2015)
External Links/Sources: 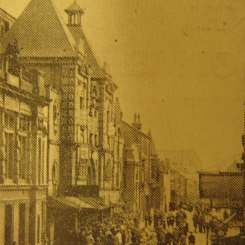