Pavilion Picture Hall / Palace / Royal Pavilion Picture Hall/ Pavilion Theatre, Leeds
Cinema Address:
250, Dewsbury Road, Leeds
Period of Thompson Ownership:
1914-1928. Sold to Denman Picture House Ltd.
How Acquired by Thompson:
Site bought by Thompson and his local partner Charles Metcalfe. In 1915, one year after opening it was transferred into Thompson's sole name at the same time as the Armley Picture Hall was transferred into Metcalfe's sole name.
Architect/Design:
G.F. Bowman
Other Info:
Built at same time as housing built in the area. As it was built sideways on a hill young boys would stand in Linden Terrace on bins to peer in to watch films. Plans below show work to convert it for sound in 1929. This reinforces the view that one of the reasons Thompson sold out to Denman (Gaumont) in 1928 was the anticipated cost of updating all venues to sound.
Fate of the Cinema:
The cinema was sold by Thompson to Denman in 1928. Around 1950 it became the Royal and closed in 1958/9. It is now an estate agents and a charity shop (2016) 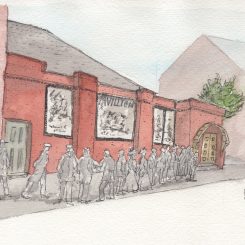