Hunslet Picture Hall / Queen’s Hall, Leeds
Cinema Address:
4 Norfolk Street, Hunslet, Leeds
Period of Thompson Ownership:
1909-1917
How Acquired by Thompson:
Rented initially short term with Charles Metcalfe and then they took on a lease in 1910.
Architect/Design:
Had been the South Ward Liberal Club Hall before they converted it.
Other Info:
Close to Crown Point Printing Works from which many customers will have come.
Fate of the Cinema:
Closed in 1917 and later demolished. Ultimately larger site was Wallace Arnold Garage and then Reg Vardy before closing. (2018)
External Links/Sources: 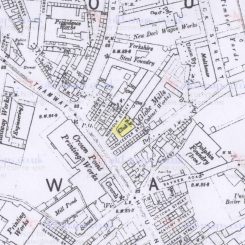