Armley Picture Hall, Leeds
Cinema Address:
4 Branch Road, Leeds
Period of Thompson Ownership:
1910-1915.
How Acquired by Thompson:
Bought as an old chapel by Thompson and Charles Metcalfe. In 1915 it was transferred into Metcalfe's sole name at the same time as the newly built Pavilion Picture Hall was transferred into Thompson's sole name.
Other Info:
Opened as Pictureland at Easter 1910
Fate of the Cinema:
Became Western Talkie in 1933. Closed in May 1956 but reopened as the New Western in October 1957. Closed on 30 December 1960. It was the used for bingo and then as an amusement arcade. It is currently the Baltic European Supermarket (2018)
Site Links: 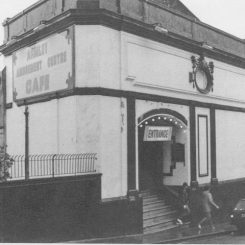