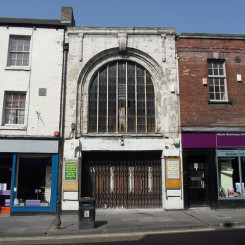 Frontage when derelict 9/4/2011 Cinema Treasures/William Mewes – Reproduced under Creative Commons (Attribution) License
Location Accuracy: Accurate
Information below is taken from The Kinematograph Yearbooks. The Page reference is from the following year’s edition, when information appeared. Additional information is in italics