Hippodrome, Thornley
Cinema Address:
East Street, Thornley
Period of Thompson Ownership:
1912-1928. Sold to Denman.
How Acquired by Thompson:
Built
Other Info:
Opened on 23rd September 1912. It was bought by Denman in 1928 and a British Acoustic sound system was fitted. An independent operator took it on in 1939.
Fate of the Cinema:
Closed in 1959 and derelict for years it was given to the local council in 1971 and subsequently demolished
External Links/Sources: 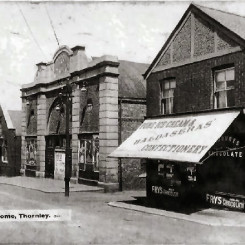