Tivoli Electric Theatre , Spennymoor
Cinema Address:
Cheapside, Spennymoor
Period of Thompson Ownership:
1929-1933
How Acquired by Thompson:
Bought from A J Vasey.
Architect/Design:
It was rebuilt upon acquisition by Thompson in 1929/30 to plans by J W Hayes with a facade covered in white tiles.
Other Info:
The original cinema was opened in 1910/11 but soon after opening was damaged by a minor fire when a film jammed in the projector.
Fate of the Cinema:
It was acquired by Lewis Sheckman in October 1935 to become part of the Essoldo chain and was renamed the Esseldo from January 1947. Part time bingo was added in the early 1960s and became full time by 1969. It later became a nightclub but was destroyed by fire on 24/25 August 1995 and the site was subsequently cleared.
External Links/Sources: 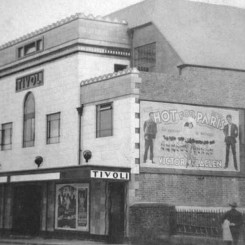