Palladium, South Shields
Cinema Address:
248 Sunderland Road, South Shields, NE34 6AS
Period of Thompson Ownership:
1930-1960
How Acquired by Thompson:
Built
Architect/Design:
Designed by J H Morton & Son with a car park at rear. Seating was provided on a stadium plan, with a raised stepped section at the rear, rather than a conventional overhanging circle.
Other Info:
It opened on 18th August 1930 with “Elstree Calling” described as an ‘all talking, singing and dancing film’.
Fate of the Cinema:
Closed on 30th July 1960 with "The Blue Angel" starring Curt Jurgens. It was converted into a supermarket and is currently a FarmFoods store (2015)
External Links/Sources: 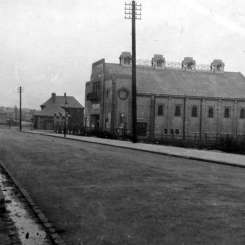