Picture House, Saltburn-by-the-Sea
Cinema Address:
Corner of Milton Street/Garnet Street, Saltburn-by-the Sea
Period of Thompson Ownership:
1914-1930
How Acquired by Thompson:
Presumed that he bought it between 1910 and 1914
Architect/Design:
Originally a Primitive Methodist Chapel
Other Info:
After the Primitive Methodists moved to new premises in 1910 it became a cinema and it is assumed that the Picture House is the same as the Cosy Cinema. That later became the Cosy Bingo & Social Club.
Fate of the Cinema:
Demolished in 2008. Now a block of flats
External Links/Sources: 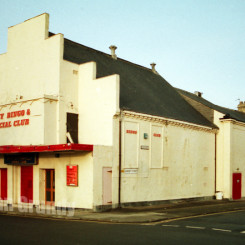