Assembly Rooms, Saltburn-by-the-Sea
Cinema Address:
Saltburn Bank, Saltburn-by-the-Sea, Cleveland TS12 1HH
Period of Thompson Ownership:
1919-1928. Sold to Denman Picture Houses Limited.
How Acquired by Thompson:
Unknown - May have owned it or could have just run the cinema/variety elements
Architect/Design:
The Assembly Rooms were built in 1884 by a Mr T.D. Ridley of Coatham to a design by Alfred Waterhouse of London
Other Info:
A Mr A T Griffin was granted a licence in May 1885 year for 'dramatic performances,' but no alcohol was to be served. The opening concert was held on Friday 10 July 1885 attended by a 'large and fashionable audience.' The concert hall could accommodate 600 people and was described as boasting commodious dressing rooms, waiting rooms and as being elaborately furnished. Many touring companies were to grace the stage in the ensuing years.
During its cinema years it may have also been called the Spa Cinema.
The building became known as The Spa Pavilion after it was extended and extensively 'modernised' around 1935 and was considered as a notable asset to the town. At this time a sun lounge was added.

Fate of the Cinema:
The building became known as the Philmore Country Club in the early 1970’s and then as just Philmore's around 1983. The night club boasted a capacity of 1400 on split levels with a balcony overlooking the dance floor. Both Chris Rea and Sting (as a member of Last Exit) played here. By October 1989 Friday nights became known as 'Big Beat' night as part of the Rave scene and were so popular that the club was eventually forced to close in April 1992 following the loss of its entertainment licence after a number of problems and complaints. It finally became known as the Spa Hotel around 1994 and still operates as such
External Links/Sources: 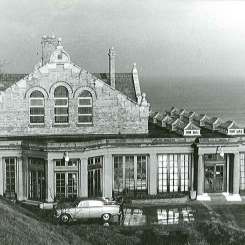