Pier Pavilion, Redcar
Cinema Address:
Esplanade, Redcar
Period of Thompson Ownership:
1930-1931
How Acquired by Thompson:
Bought or leased
Architect/Design:
In 1907 a pavilion ballroom was built on the pier behind the entrance kiosks and in 1928 the pavilion was extended.
Fate of the Cinema:
The pavilion continued in use after the Second World War despite the deliberate breaching (sectioning) of the pier (to prevent it being used by enemy invasion forces) and structural weakening caused by a nearby mine explosion. Damage to the pier by subsequent storms finally led to its demolition in 1981.
Site Links: 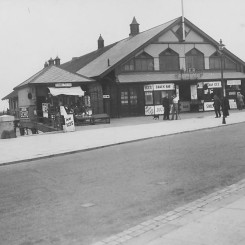