Theatre Royal, Middlesbrough
Cinema Address:
Sussex Street /Albert Street, Middlesbrough
Period of Thompson Ownership:
1925-1928. Sold to Denman Picture Houses Ltd.
How Acquired by Thompson:
Bought
Architect/Design:
The original Royal Albert Theatre, designed by Mr Blessy fronting Albert Street was opened in 1866, costing £10,000 to build and kit out. Well known theatre architect Frank Matcham made some alterations in 1890. In 1900 a new Theatre Royal, designed by Hope & Maxwell, was built within the walls of the original. The entrance was also switched to Sussex Street. Seating was provided in pit, orchestra stalls, dress circle and gallery, with boxes on each side of the proscenium. The ceiling had paintings of flowers. There was standing room for 550. The stage was 40 feet deep and there were ten dressing rooms.
Other Info:
At the opening on 24th December 1900 the show was the pantomime “Aladdin”. At the end of 1914, it was re-named the Royal Cinema, but soon the theatre went back to live theatre use and reverted back to the Theatre Royal name. Cinema use, with variety acts as well, definitely resumed upon Thompson's acquisition in 1925.
Fate of the Cinema:
Bought by Denman in 1928 and sold to an independent operator on 24th November 1930 and renamed Royal Cinema. In 1932 Sol Sheckman’s S.S. Blyth Kinemas Ltd. chain took over operations, and use continued with a mixture of cinema and live theatre use. This chain was later merged with the Essoldo Cinemas chain, and the Royal Cinema was re-named Essoldo from 24th April 1953, on the installation of CinemaScope. The Essoldo was closed as a cinema on 17th July 1961. It was re-opened as a cinema again on 31st December 1961, and closed on 30th June 1962. It was converted into a bingo club and was closed and demolished in 1978. Housing was built on the site.
Site Links: 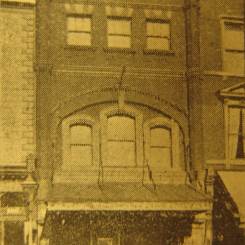