Pavilion Picture Palace / Theatre, Middlesbrough
Cinema Address:
Newport Road, Middlesbrough
Period of Thompson Ownership:
1913-1928. Sold to Denman.
How Acquired by Thompson:
Possibly built or bought soon after built.
Architect/Design:
Architect James Forbes of Middlesbrough. Originally designed for A H France in 1912. It is not known if Thompson was involved by the time it was built. It had a 22 feet wide proscenium
Other Info:
As The Pavilion Theatre it opened in July 1913 presenting drama & comedy plays but was converted to cinema use in 1914.
Fate of the Cinema:
After closure (between 1957 and 1960) it was converted into a discotheque. It was called Sloopy's in the late 1960s. After a fire in 1973 it was closed and the facade towers were removed. In the 1970s it was known as the Rock Garden and in 1977 the Sex Pistols appearing as "Acne Rebel" because of management problems. It was renovated in 1991 and re-opened as a rock concert venue and later became a nightclub named Arena and it continued as such until closure. It was derelict in 2013.
External Links/Sources: 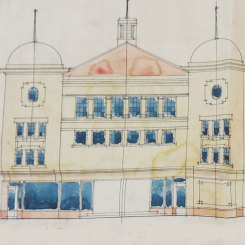