Cleveland Hall/Cinema, Middlesbrough
Cinema Address:
between Newport Road and Park Street, Middlesbrough
Period of Thompson Ownership:
1908-1928. Thompson's first cinema and the first one to be opened in Middlesbrough. It became affectionately known as the "Bug and Flea". Sold to Denman Picture Houses Ltd.
How Acquired by Thompson:
Rented then bought
Architect/Design:
Built as an auction hall by Willman and Douglas, the auctioneers. Then bought as a social club in 1873 it became the Liberal Club and in 1890 it was licensed for theatre and dancing.
Fate of the Cinema:
After acquiring it from Thompson, Denman/Gaumont kept it open until 1930 when they closed it and left it derelict. By 1936 it had been demolished to make way for the United Bus terminus.
Site Links: 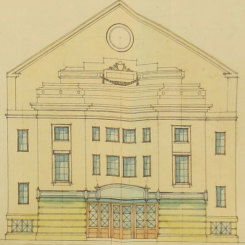