Royal Aquarium, Great Yarmouth
Cinema Address:
Marine Parade, Great Yarmouth, NR30 2DJ
Period of Thompson Ownership:
1931-1968
How Acquired by Thompson:
Bought and Converted
Architect/Design:
Designed by the Architects John Norton & Philip E Masey and originally opened as an aquarium in 1876. Converted into a theatre by the Architects Bottle & Olley in 1883 and renamed the Royalty Theatre. Another smaller theatre also opened in part of the building in 1925. Sold by Thompson company in 1968. Conversion into multi-screen cinemas in 1970. Part adapted for use a seasonal theatre in 1984. Thick glass tank fronts are said to remain behind the curtains in the main auditorium
Fate of the Cinema:
Still operates as Hollywood Cinema and nightclub (2015)
Site Links: 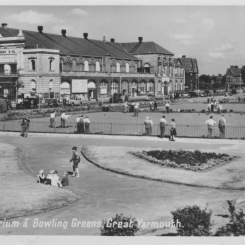