Pavilion, Ferryhill
Cinema Address:
Main Street, Ferryhill
Period of Thompson Ownership:
1927 - 1946? then 1954 - 1967
How Acquired by Thompson:
Built and jointly run by Wall and Thompson
Other Info:
The Pavilion Cinema was opened in 1927. It is not clear if the Thompson involved in the early years was Thomas Thompson. The Kinematograph Yearbooks refer only to "Wall and Thompson". This cinema is not listed at the time as being in Thomas Thompson's circuit but that could just be an oversight. Also it does state that films were booked at Newcastle. If it was a Thomas Thompson cinema one would have expected the films to be booked at Middlesbrough. Wall and Thompson sold the cinema in 1946 to a third party but it was definitely bought by a Thomas Thompson company in 1954 and owned by them until its closure in 1967.

Fate of the Cinema:
Closed in 1967 and converted into a bingo hall. Currently in use as an amusement hall, cafe and tanning salon (2015)
External Links/Sources: 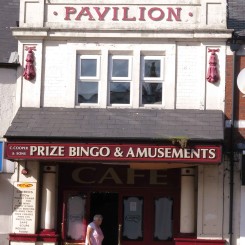