Majestic, Durham
Cinema Address:
Sherburn Road, Durham, DH1 2EP
Period of Thompson Ownership:
1938-1961
How Acquired by Thompson:
Built
Architect/Design:
Seating was provided on a stadium plan, with a raised stepped section at the rear instead of an overhanging balcony.
Other Info:
It was built opposite a new estate to attract an audience from there and nearby villages on the eastern edge of Durham. It opened on 29th August 1938 with Jeanette MacDonald and Nelson Eddy in “Maytime”.
Fate of the Cinema:
It was badly damaged by a fire on 26th August 1956. Repairs were carried out and it re-opened on 6th December 1956 with Kenneth Moore in “Reach for the Sky”. It closed in November 1961 with Elvis Presley in “Flaming Star” although the Kinematograph Yearbooks have it still listed as a cinema until at least 1970. It was converted into a full time bingo club. In 2014 it operated as a Top Ten Bingo Club and in 2015 was the Apollo Bingo.
Site Links: 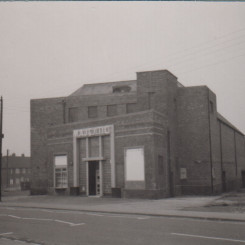