Empire, Thorne Moorends
Cinema Address:
Marshlands Road, Thorne Moorends, DN8 4SB
Period of Thompson Ownership:
1937-1958
How Acquired by Thompson:
Bought
Architect/Design:
Designed by W A Kellett in 1931. 30 feet wide proscenium
Other Info:
The Cinema is in the Moorends district of the small town of Thorne, to the north-east of Doncaster. The Empire Cinema possibly opened in the 1920’s or earlier, and may originally have been named Empire Palace Theatre but certainly a new cinema was built in 1931.
Fate of the Cinema:
Gutted by a fire on 27th February 1952. It was still closed in 1953 and possibly never reopened, but repairs were carried out and it became a church hall. More recently it was demolished and replaced by the Hedgerow Children's Centre.
Site Links: 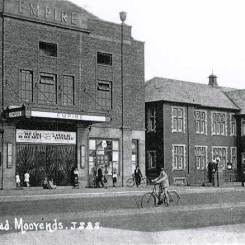